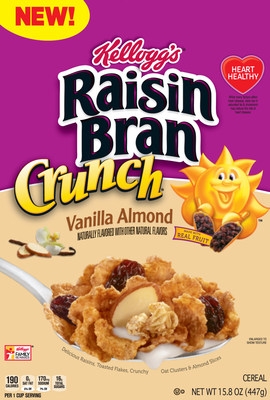 This summer the cereal aisle will get a bit sunnier with the addition of new Kellogg’s Raisin Bran Crunch® Vanilla Almond.

The new cereal has the addition of almond slices and a hint of vanilla flavour to the crispy bran flakes, raisins and crunchy clusters.

The only cereal in the Raisin Bran line-up to include nuts, new Kellogg’s Raisin Bran Crunch® Vanilla Almond provides the crunchiest start to the morning with a variety of textures in a single bite, and good source of fibre along with 16 grams of whole grains.

The cereal will be available beginning in June at all major retailers and grocery stores where breakfast foods are sold.