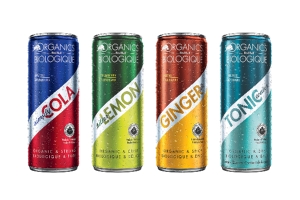 Red Bull, known for its energy drinks, has launched a line of organic sodas, available in early June.

Unlike its taurine-based predecessor that inspired the name, the new Red Bull ORGANICS line of sodas will not be energy drinks.

The new flavours offered will be: Red Bull Simply Cola, Bitter Lemon, Ginger Ale and Tonic Water. With the exception of the cola, none of the drinks will include caffeine. The company’s foray into a line of better-for-you carbonated drinks are aimed at those who are looking for more natural flavourings in their soft drinks. The drinks will be sold in 250ml cans, wherever Red Bull energy drinks are sold in various locations across Canada.

Red Bull has been manufacturing its drink for over 30 years; This is the company’s first launch of a carbonated soft drink option in their line.