The name might sound fruity, but the technology is anything but. Just
ask Jim Kelley, president of the full-line vending company, P&J’s
Vending. Kelley has been so impressed with Cantaloupe Systems’ Seed
wireless monitoring platform since he purchased 25 units last year,
that he returned to the National Automatic Merchandising Association’s
annual trade show in October to help Cantaloupe spread the word. 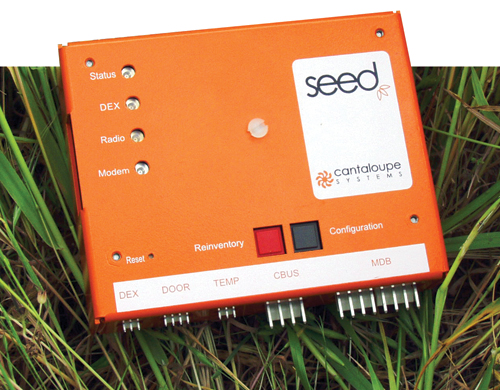 The name might sound fruity, but the technology is anything but. Just ask Jim Kelley, president of the full-line vending company, P&J’s Vending. Kelley has been so impressed with Cantaloupe Systems’ Seed wireless monitoring platform since he purchased 25 units last year, that he returned to the National Automatic Merchandising Association’s annual trade show in October to help Cantaloupe spread the word.

During the educational session, “Understanding Remote Machine Moni-toring,” Kelley’s rave review was a testament to Seed’s advanced RMM capabilities. After he presented his case for Seed, well, it was ‘good luck’ getting a chance to talk to president, Glenn Butler, or anyone else from the Cantaloupe crew on the expo show floor. Their exhibit booth, which was modishly designed and fittingly coloured bright orange, was crawling with vending operators hoping to get a taste of the sweet new technology.

So what makes Seed different? Well, we all know what remote machine monitoring is all about; using the machines’ DEX capabilities to acquire sales data and inventory levels and schedule service visits accordingly (among many other things that we’ll discuss later).
But two key strengths make Cantaloupe’s technology unique. First, with Seed, DEX data is gathered in real-time and transmitted to the operator via an existing wireless, cellular network. No handhelds are required. Secondly, operators access the information online via a secure website. No costly software and subsequent costly upgrades are required.

The big difference between accessing real-time data versus historical data is that with the latter, there is still a certain level of guesswork involved, according to Mike Gron, president of E2 Wireless. The “scheduled service estimates” touted by other RMM software systems are typically based on the previous day’s sales. Whereas with real-time data, operators know exactly what is in and what is needed in each machine at any given time. With real-time the “first walk,” says Gron, is actually eliminated, allowing operators to reduce labour costs and consolidate routes.

“Last summer we decreased route personnel by half after we installed Cantaloupe’s system. Our real-world data has shown that our drivers have been able to handle about 25 per cent more machines on their route after dynamic scheduling,” Kelley boasted to fellow operators during the 2006 NAMA seminar. 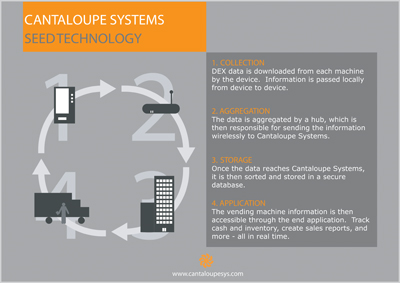 One of Kelley’s favourite features is the “alerts” section on the Seed website, which instantaneously notifies him when any of his machines require immediate attention: item sellouts and even machine malfunctions.

“I don’t know how anybody can sleep at night without Seed,” Jon Orlick, president of Always Vending said of the new system. Late one evening a custodian at one of his locations tripped the circuit breaker, causing one of his ice cream vending machines to lose power. The system instantly notified him and he claims it saved him hundreds of dollars worth of inventory.

It saves Kelley a lot of money too, but he says it also helps him acquire more. Many of his clients are colleges and universities. In these locations machines tend to experience wide swings in volume activity because of sporting events, vacations periods and summer schedules. Monitoring the machines closely with the technology enables him to assure timely and proper servicing.

“Colleges are very impressed. They know they don’t have to baby-sit us. We know when the machines need to be serviced,” he said.
And when school boards put out bids for operators, the concept of remote monitoring helps him differentiate his company from the competition. Cantaloupe provides marketing packages for operators to bring to prospective clients, said Butler.

Kelley also likes the fact that he is always in two-way communication with his machines – wherever he may be. The system doesn’t tie him down to one personal computer like other software systems. Plus, upgrades to the software are done automatically. Because his machines’ DEX data is “stored” at Cantaloupe headquarters, he can access it all online from any computer.
But therein lies two potential obstacles.

First, operators have to pay a monthly fee of approximately $7 per machine to access the data and other features. The fee pays for the cellular signal required to transmit the data. It’s a small fee, comparatively, but it’s one of the reasons Kelley started by testing the platform on only 25 machines. He has since announced that he will be adding remote monitoring to the rest of his vending lineup. Initially, it will cost him about $200-300 to install the wireless device in each of his DEX-compatible machines.

Canadian operator and president of Ryan Vending on Vancouver Island, Bob Oughtrend, is currently working with Cantaloupe Systems to incorporate remote monitoring and dynamic scheduling advantages into his operational profile. He says Ryan Vending is committed to capturing all the advantages of the technology and has committed the financial resources necessary to see them materialize. But like all great advancements, he said, the effort contributed is relational to the benefits derived.

Another problem operators could face is accessing the wireless cellular network in rural areas, outside of the urban centre. But this is easily remedied, according to Gron, who recently helped a mid-sized operator in rural British Columbia jump this hurdle by adding a signal amplifier to the unit.

Vending is good because it tends to be an urban phenomenon, said Gron. As the exclusive Canadian distributor, he assures the cellular network Cantaloupe has chosen in Canada covers almost every urban centre.

The platform is flexible, he said. Some operators start with just a few machines or at least one route. What they find to be the biggest benefit is the peace of mind it provides. With the ability to monitor in real-time, keep track of unauthorized entries, add remote locking systems and even reprogram them from the office, vending machines have never been safer.