When most Canadians open their
kitchen cupboards, they’re sure to find at least one product packaged
in a container made with bisphenol A. 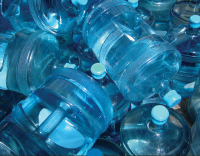 When most Canadians open their kitchen cupboards, they’re sure to find at least one product packaged in a container made with bisphenol A.

The controversial chemical, expected to soon be designated a toxic agent by the federal government, is a mainstay of products consumers use every day – from water and baby bottles to liners in food and beverage cans to sealants used in dental fillings.

Bisphenol A, or BPA, allows manufacturers to make a rigid and translucent product known as polycarbonate plastic, often – but not always – identified by a triangle surrounding the number 7. In canned food and beverages, especially acidic vegetables and fruits, BPA-resin liners stop the contents from eroding the metal container.

But it’s also a molecule that mimics estrogen and can leach from receptacles: injection of the agent into lab rodents has been shown to cause hormonal dysfunction and tumours, and scientists believe long-term exposure in humans could lead in some cases to infertility, early puberty, and even breast and prostate cancers.

So if BPA is virtually everywhere, what can consumers do to protect their health?

“My advice would be to take action, that there’s enough evidence to take action,” said Rick Smith, executive director of Environmental Defence, an advocacy group that has long lobbied to have BPA deemed a toxic agent.

“So people don’t need to rush out today, but certainly as soon as they can they should substitute non-toxic alternatives for their bisphenol A products, especially if they’re using things for their kids.”

Infants and children are especially vulnerable to pollutants and toxins because their brains and bodies are still developing, with their cells dividing more quickly than those of adults, he said.

While many manufacturers have stopped making BPA-containing plastic baby bottles and turned to safer alternatives, parents may still be using older products that can leach BPA with heating and washing, as well as from acidic liquids like juice.

“They should absolutely ditch their bisphenol A baby bottles and sippy cups,” said Smith, who advises switching to glass, or at the least, non-toxic plastic. “There are very good, reasonably priced alternatives in the market right now.”

The same is true for sports water bottles made with plastic containing bisphenol A. In fact, many major Canadian retailers have pulled such bottles from their shelves, replacing them with non-toxic plastic or stainless steel products.

But Smith conceded it will be more difficult for Canadians to entirely eliminate BPA exposure because so many food and beverage containers are made with the chemical.

“Most brands of tin cans are lined with a bisphenol A resin,” said Smith. Large water-cooler jugs are also often made from that type of plastic, as are soft drink and fruit juice bottles.

“When it comes to canned goods, it’s much more difficult and this is where we need regulatory action, because unless you’re fortunate enough to live right beside a farmer’s market, you’re probably not going to be able to completely eliminate canned goods from your diet.”

“And this also loops back to kids,” he said, noting that most baby formulas are in cans lined with BPA resins. “So if a kid is drinking formula from a bisphenol-A
baby bottle, they’re actually getting a double whammy because the actual packaging that the formula comes in contains bisphenol A and then you’re adding it to a baby bottle.”

Smith advises parents to switch to powdered formula sold in cardboard containers. Even though those paper-based packages have metal tops and bottoms lined with BPA resin, contact with the dry contents would be much reduced, he said.

“So when it comes to infant formula, families can minimize their exposure through using powdered formula. But in general unless you completely eliminate canned food from your diet, there’s no good answer.”

What to do about bisphenol A-based plastics is proving a conundrum for container makers as well, said Lawrence Dworkin, director of government relations for the Packaging Association of Canada.

While research into alternatives has been going on within the industry, Dworkin said no substitute has been found to do the job of maintaining the integrity of metal cans and protecting contents from spoilage.

He estimated that packaging manufacturers in Canada employ between 4,000 and 5,000 people.

“If it was outright banned tomorrow,” he said of bisphenol A, “we should have some major disruptions certainly in the production side of those companies and … (it) would probably shut down the industry.”

Still, Dworkin said the industry would live with whatever the government decides, whether that means getting rid of BPA completely or meeting allowable levels.

“If it’s proven this stuff is a health hazard, then it’s got to go. The health of consumers comes first.”

Worldwide production capacity for BPA is 3.7 billion kilograms per year, according to chemical industry analysts. Just over a billion kilograms are produced in the United States – with half of that in Texas plants owned by Dow, Bayer and Hexion Specialty Chemicals.

Mark Walton, a spokesman for Dow Chemical, said BPA is one of several agents being assessed under Canadian environmental law, a step that would enable authorities to “consider any other forms of regulatory actions that may be appropriate based on the science.”

Walton said it’s unlikely Dow would change what it does about bisphenol A “in the near future.” The company and a number of regulatory groups have reviewed BPA and “these reviews continue to find that there is no concern for health, although some do say we’d like to have some areas of the science clarified by more research.”

Smith of Environmental Defence predicted that given the parade of retailers choosing to pull products made with BPA, manufacturers that don’t switch to alternatives will lose market share to those that do.

But even if Ottawa does deem BPA a toxic material, “this is not the end of the road by any means,” said Smith.

“The regulatory process in Canada is a very long and tortuous process. We don’t know exactly where the government is headed, but certainly there’s a lot of momentum unfolding and we think it’s headed in the right direction.”