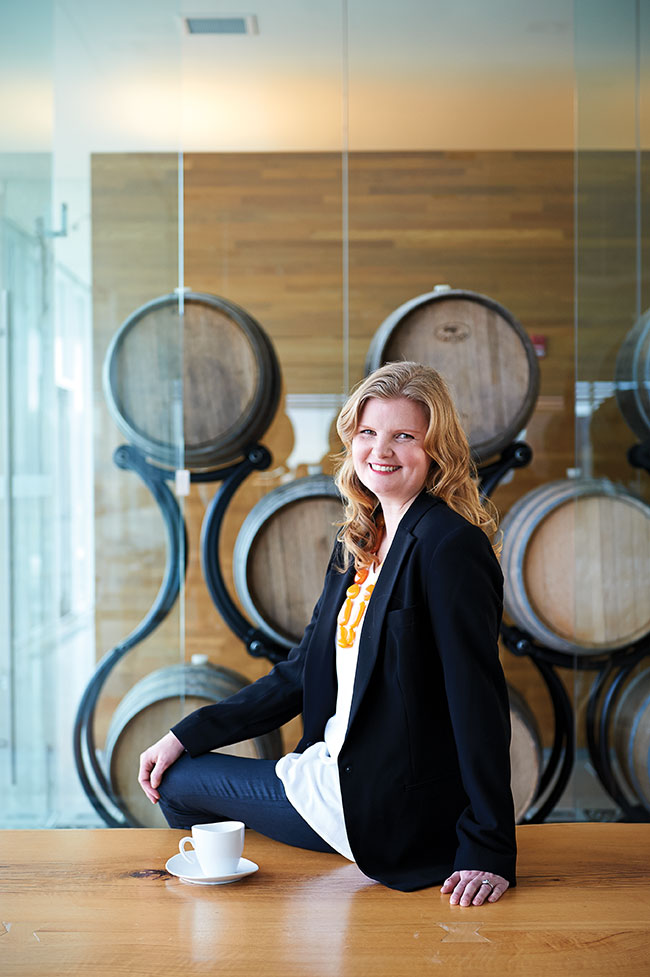 Jennifer Commins won the 2019 Women’s Entrepreneurship Award. She is the founder and CEO of Pluck Teas. In 2017 Pluck Teas won the Global Tea Championships, and the Canadian company was also awarded the 2018 Sustainability Award by the Tea Association of Canada at the US at the North American Tea Conference. “We were up against the big guys and we won,” she recounted.

When Commins and I spoke, the province was in lockdown. The packing plant adapted to the new reality by providing sanitizer at each station and following zoning rules with the use of HACCP-certified barriers. Strict protocols were put in place for shipping, receiving and other day-to-day operations.

While the pandemic hit service industries like restaurants and OCS, she noted that Pluck’s sales were down by 85 per cent during the worst of the lockdown.

“The government subsidies have really been critical to us being able to stay in operation while we reposition ourselves as a direct-to-consumer and CPG, so we teamed up with Neal Brothers.”

Operating a new business venture during quarantine isn’t ideal, but given Pluck’s sales situation, they decided to jump in and try their hands at retail. As of this fall, Whole Foods will begin carrying their line of teas.

“We’re taking this time to really think through the entire business and improve operations. Unfortunately, we did have to lay off half of our staff and it’s such a bit of a quandary, because you want to bring them back when we’re getting busy and we have days where we’re just full-out packing tea and going a little crazy.

Pluck Teas earned its accolades for its blend of local ingredients with black teas, as well as its use of organic and locally sourced ingredients for its herbal teas. The company recently hired Steve Rice as president of the company. “He basically built the Tetley brand to the number one tea brand in Canada over the course of his tenure,” adds Commins. When COVID hit, Rice helped out with packing and any other task that needed to get done.

Among strategies that Pluck is considering is the turn to direct-to-consumer sales. At the moment, the company is thriving with the OCS industries, but the COVID pandemic has raised many questions ranging from hygiene to plastic reduction, without compromising health and safety.

“Imperial Coffee was the first office coffee provider to come on board, and during the first meeting I had with their president he said, ‘This will never work. This will never work, Jennifer – no. People don’t want premiums in the office. They want an inexpensive cup. Tea is a small part of our business…’ This is again, eight years ago. ‘I just want to caution you that you know this is a bit of a risky business that you’re building,’ and I said, okay, I get it.” Despite repeated refusals from Imperial Coffee Service, Commins kept coming back as his staff started asking him for better tea options.

Eight years after Commins’ initial pitch, Imperial Coffee Service now represents 15 per cent of their business. Her company has received accolades for its line of iced teas as well, most notably her Verbena Blues, a summery iced tea that changes colour when mixed with citrus juice or lemonade. 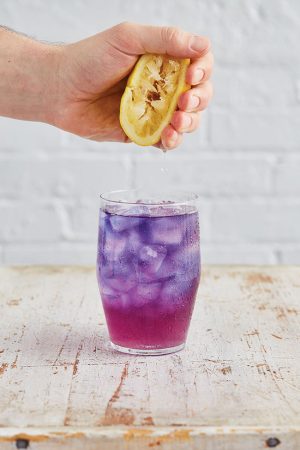 Tea changes colour with a touch of lemon.

“Our biggest customer prior to COVID was Imperial Coffee. In Canada, there’s no clear plan in place as far as we can see across that entire industry on when people are coming back to work or how they’re coming back to work in a safe way and whose responsibility it is to ensure people’s safety in the workplace.” Commins added that some of her questions involved how she could reduce plastic waste while still committing to Pluck’s sustainability mission.

“When we’re making tea we’re pouring boiling water on it. So there’s really no risk associated with steeping tea. However, there is a perception that overlap tea bags are safer: In an office environment, many hands can touch those over wrapped tea bags if they’re in one of those open boxes… it projects sort of a false sense of security. Certainly the OCS providers that we work with are asking me, ‘what are your plans around overwrap? What do we tell our customers? How do we ensure safety?’”

Commins feels that it’s up to the officers in the businesses to educate their people about hygiene and to develop their own protocols to sanitize those areas regularly. “We have thought deeply about doing over wrap but one of our brand promises is that we do everything ourselves and we do it here [in Canada.] We don’t have overwrap sheeting, also overwrap machines are over $100,000 for the one that we want to use, because we’d only want to use one that could work with compostable materials. That’s just out of reach for us at this time. That’s another reason why we are refocusing on the direct to consumer market.”

“Pre-COVID sustainability was one of the major selling points. We don’t have an over-wrap, our tea bag is fully compostable, we have a zero-waste tea program.” Commins’ company opines how attitudes have changed overnight regarding plastic. Prior to the outbreak, she said many in the OCS industry tried to avoid excessing plastic packaging. “People are now buying individually wrapped plastic wrapped paper cups for their offices. Individually wrapped plastic stir sticks. Now we’ve completely gone the other direction. I’m hoping it comes back to sustainability once this crisis is over. “

“All we can do is really educate people without using the term ‘kill bacteria,’ which sounds a touchy topic of discussion when you’re making a cup of tea and you’re using water that’s typically above 180 degrees and generally closer to 195. There’s no risk provided you’re washing your hands and provided you’re following all the other protocols. Tea should not be the riskiest part of your day.”

Commins notes that companies that have decided to partner with online shopping platforms like Shopify, are thriving. At this point, she is asking herself if there is an opportunity for small Canadian companies like Pluck Teas to create “care kits” to be delivered to employees in lieu of getting free beverages at the office. She’s thinking of ways to bring office coffee services to employees’ homes.

“A lot of people have discovered our teas in premium restaurants and want to have that same experience in the office. Then the OCS providers call us and say ‘okay, we’d love to have your tea because people are asking for it.’

Both Compass and Imperial Coffee were impressed with a female entrepreneur who started this local, Canadian business. As many coffee services are looking towards premiumizing their product line, Pluck Teas seemed like an ethical and sustainable choice for customers who were willing to pay a little bit more per tea serving in order to have that experience. “Specialty tea in general has certainly been elevated,” stated Commins. “Once you’ve had tea of superior quality it’s really difficult to go back to the big guys. I won’t name them,” she laughed.

Commins adds that there is a disparity in the OCS between coffee and tea and aims to bridge the gap in both quality and price. “Where the Keurig machines have the cost per serving is almost $1 per serving…why is a five-cent tea bag acceptable in the office? It’s like the coffee people were getting preferential treatment. I think that tea lovers woke up and said, ‘hold on a second. We want something of a similar quality.’ I think all of those elements came together to make Pluck Teas a great success in the office channel, and it’s been growing.”

Both the product line and the company have been growing since their inception eight years ago, which helped lead to working with larger OCS companies in Canada. She feels that post-COVID, OCS and pantry services can emphasize the trends of healthier options for those who are going back into a workplace. Focusing on health as well as hygiene in an office coffee environment can help boost tea sales.

“Tea, in my opinion, is the healthiest beverage on the planet, full of antioxidants and polyphenols and flavonoids and wonderful things that make you not only feel good, but also help your body. I think that this awareness around health and tea has really helped to drive that category forward.”

What’s in the future for Pluck Teas? Our plucky CEO has submitted her teas to the Tea Association of Canada for their four-star program. The association awards teas for blends that can meet their four-star level requirements. “All of our teas have passed with flying colours,” adds Commins with pride.

“Yeah, I don’t want to overstate how exciting this is, taking our ideas and our knowledge around specialty tea and premium quality, sustainability and ethical sourcing, and applying it to that ‘dusty old tea bag’ category. We’re going to be doing a subscription model, and we’re going to be putting that into office coffee service channels and we’ll be putting it out into CPG world as well. “