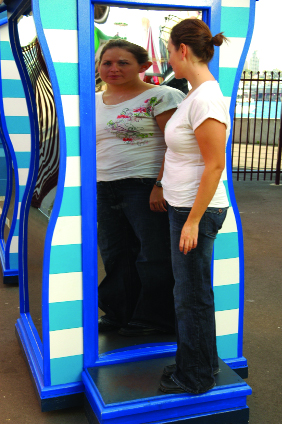 While they’re trying to make money off of greater demand for healthier grab-and-go food, they’re also hoping the new products will help them avoid increased federal regulation and the threat of lawsuits that allege complicity for the country’s rising rate of obesity.

Kellogg Co., maker of Pop-Tarts and Cheez-It crackers, said it will restrict use of licensed characters such as Shrek in its advertising, and either reduce the amount of calories, fat, sugar and sodium in products or stop marketing them to children under age 12 by the end of next year.

Kellogg said the changes were the result of negotiations with two Massachusetts parents groups, the Boston-based Campaign For A Commercial-Free Childhood and the Center for Science in the Public Interest, a food lobby group. Together, they had threatened to sue the company and Nickelodeon, the children’s cable network owned by Viacom Inc.

Kellogg’s changes build on a move by Walt Disney Co. last fall to limit the use of its characters in marketing junk food to children, and an earlier one by Kraft Foods Inc., which in 2005 stopped advertising products high in fat and sugar to children under 11. Kraft has also expanded its organic and diet lineup.

Nutritionists note many of these products are far from health food, but some of the changes are an improvement. Smaller servings, such as 100-calorie packs of products such as Frito-Lay’s Doritos and Kraft’s Oreo thin crisps, can help people eat less, said Cornell University nutrition and psychology Prof. David Levitsky.

The challenge for the US$10.39 billion-a-year snack foods industry is to balance healthier ingredients and consumer taste. And the numbers show it’s struggling. Sales of reduced-fat, low-fat and fat-free snacks fell 2.6 per cent in the past year, according to data from Nielsen LabelTrends. Total snack sales rose 3.4 per cent.

The U.S. Federal Trade Commission had set a public hearing for July 18 to discuss food advertising targeting children, where comments from critics could put pressure on food companies.

The FTC in coming months also is expected to survey 44 food and drink companies about their spending and methods used in advertising to children. The survey could provide more fodder for critics.

“They’re trying to take enough steps so Congress won’t pass laws and they won’t get sued,” said Margo Wootan, Nutrition Policy Director at the Center for Science in the Public Interest. The Washington, D.C.-based advocacy group that focuses on nutrition and food safety has used the threat of litigation to get some food and drink makers to stop using misleading ads and labels, remove soft drinks from schools and eliminate trans-fats.

PepsiCo has come up with a Smart Spot designation that appears on nearly 300 products that meet certain nutrition standards set by the company. The products can get the label if they have 25 per cent less calories, fat, sugar or sodium than the original product or have a “functional benefit,” such as hydration. That allows the logo, a white check mark over a green dot, to appear on diet versions of its Pepsi Cola, Mountain Dew and Mug Root Beer, and on baked Cheetos, Doritos and Lay’s.

PepsiCo plans to announce new guidelines for marketing to children within the next few weeks, spokeswoman Lynn Markley said.

Markley said that while PepsiCo is willing to work with the FTC, the effort to add healthier products to its portfolio is not driven by fear of greater regulation.

“I don’t believe that,” she said, adding that the healthier products combine business interests with the public interest. “There’s a committed effort to provide products that can contribute to healthier lifestyles.”

Kraft, maker of Kool-Aid and Velveeta cheese, has started selling a Sensible Solution line of more than 500 products with a green flag to alert shoppers that it has a nutrient such as protein, calcium or fibre, or that it has lower levels of fat, sugar or sodium than the regular versions of the product. Kraft says the standards differ from category to category.

And that’s part of the problem, Wootan said, arguing for more uniformity in the industry standards. Self-regulation so far has been inadequate, she added.

“How is a parent supposed to look into and do research on nutrition criteria for each one?” she said.

PepsiCo, Kraft, Kellogg and McDonald’s, all of which have operations in Canada, are among 11 companies that have banded together to self-regulate their advertising to children and minimize government interference.

The others are Cadbury Schweppes USA; Campbell Soup Co.; The Coca-Cola Co.; General Mills Inc.; The Hershey Co.; Unilever, maker of SlimFast and Country Crock; and Masterfoods USA, maker of Snickers, M&Ms and Skittles. Announcements from several of those companies on ad policy changes are expected soon, said Linda Bean, a spokeswoman for the group.

“There’s a major confrontation that’s going to come up between the health industry and the food industry and that’s what we’re seeing,” Cornell’s Levitsky said.

Kraft spokeswoman Elisabeth Wenner said it is co-operating with the FTC process but believes that self-regulation is the best approach right now.

Regulators are focused on children, in part because they are particularly susceptible to marketing and are showing a marked rise in obesity, Wootan said.

Among children between the ages of 6 and 11, 19 per cent are overweight, according to the National Center for Health Statistics, and studies show overweight children are more likely to be obese as adults.

A separate report on TV ads released by the FTC June 1 showed that the percentage of ads for junk food, sugary cereals and soft drinks on children’s programs is twice what it was 30 years ago, even as the total number of food ads has fallen.

Snack and fast food makers are now trying to seduce parents with promises that they’re doing better. A McDonald’s ad now shows a Happy Meal of chicken McNuggets, sliced apples and low fat milk, instead of the usual french fries and soda.

Soft drink makers also have been adding lower-calorie offerings, as sales of carbonated soft drinks decline and sales of bottled water and teas rise. PepsiCo recently bought Izze and Naked Juice and entered a partnership with Ocean Spray while Coca-Cola bought Glaceau, maker of Vitaminwater, and announced a partnership with Campbell, which makes V8.

One of PepsiCo’s biggest investors said the health initiatives are good for future profitability.
“It’s a smart business strategy,” said Walter McCormick, manager of the fundamental large-cap fund at Evergreen Investments in Boston. “Clearly the trend is to healthier foods.”

Still, traditional snacks and cola are the more reliable source of revenue, as consumers gravitate to what they know.

“You certainly don’t want to abandon your old-line customers,” McCormick said. “Every now and then, even if you feel like fish and poultry, you do want to have a steak.”o