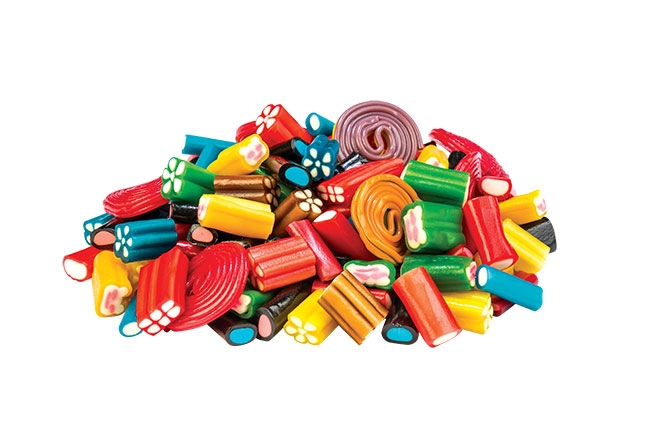 Ryan Storey of Huer foods supplies the sweets and snacks for many of Canada’s vending machines. Storey took time out of his busy schedule to share some insights as to what will drive the candy-buyers to machines.

We asked if he noticed any trends or if he’d share any insight with Canadian Vending and Office Coffee Service Magazine.

“It’s pretty consistent. We supply the vending trade…and vendors only have so many coils, there’s a couple coils for chewy candies, like gummy bears, gummy sours. That’s where I fit in trying to get those coils. Whereas Fritolay may have ten coils because they have a wider
variety. Candy is kind of a ‘steady-Eddie.’”

Storey explained that where some snack trends wax and wane with food trends or perceived health benefits, candy remains the snacking standby. Nuts may or may not be in favour depending on where the machine is located: Some schools and some recreation centres might ask to have nut-free machines. Carbohydrates like snack cakes may or may sell, but candy is a steady choice as it is often a shareable treat.

“Sweets still have a presence in machines. It has a steady placement and has not been displaced by salty snacks. The sweet sections tend to be less (there’s fewer coils in the soft and chewy market.) When you look at the sweets section, all those areas come from different people, there’s not a lot of overlap.”

Huer Foods recently launched a line called “sensible sweets:” A broad range of soft and chewy candies made with natural flavours and no artificial
colouring. While better-for-you treats are burgeoning in the market, we had to ask if healthier sweets were going to be the norm for vending machines.

“The vending operators are very sensitive to price; you know there’s a huge premium already built into it when they purchase it at a vending machine, so those healthy foods can tend to be too expensive for the vending market,” explains Storey.

“Right now, vending is fairly mainstream. Vendors are very concerned with the profitability of a coil. They’re not going to put in a product that doesn’t have momentum and high velocity. When you go into Loblaws and they have an organics and all-natural section. There’s some volume there, but it’s nothing like the regular confectionary aisle… I don’t know if the market is strong enough to support displacement of traditional items in vending machines.”

The challenge for operators lie in knowing their market and being familiar with the environment the machine is in. Storey lends some advice in getting the most out of your vending location, and bringing repeat impulse buyers in. He shares some great tips with Canadian Vending for the first-time vendor:

“You have to look at where your machine is being placed: What kind of client would your machine attract in a ballpark, as opposed to an office canteen or a fitness club. For a fitness club, there’s no reason not to have a probiotic gummy bear, or a low fat chip, something along those lines. You have to target your machine to your specific clientele, just like a vending machine in a school these days may not have any candy in it.”

What we’ve learned is that vending is about impulse. In the majority of vending, you’re getting the same consumer, over and over again. It’s the same family that attends the same marina, it’s the same family at the ballpark, the same office, so they’re there every week. They go to your machine because it’s convenient.

“You want to retain your loyal consumer you don’t have competition, but it’s also an impulse, since it’s not something that they necessarily need,” suggests Storey. “They can just as easily decide not to purchase it, so if you put something of inferior quality [into your machine] then they won’t come back to your machine and they will go elsewhere.”