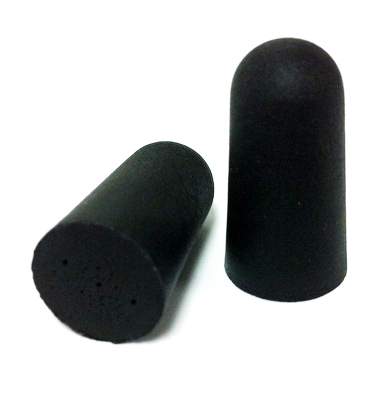 Rock ‘n’ roll collided with the vending industry when Whut!? founder, Alisa Davis recognized that there was a market for reusable earplugs at concerts. She realized they could be sold in in capsules like toy vending machines. “People don’t often realize that they need hearing protection until they’re actually at the show: especially people who don’t party every weekend. Maybe people who don’t go out very much to those kinds of environments and forget how loud it can actually get. So our product serves that need right there when you need it,” explained Davis in an interview with Canadian Vending and Office Coffee Service Magazine.

“Instead of having potential customers go to the coat check in a club or line up at the bar to buy earplugs where those are often sold, just have the machine right there. It’s really convenient,” said Davis. 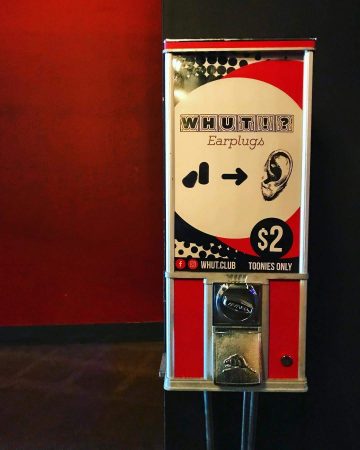 The Ontario-based company named their product Whut!? They started an online shop as well, named Whut.club. Both the online service and the earplug vending machines were conceived out of necessity when Davis and her husband attended a concert. “It was so loud, I couldn’t even hear the music because of the reverberation. We looked around, and noticed that there were some very well dressed people. Young guys wearing very fashionable clothes. You could tell that they spent some time and money looking good. But then, on closer inspection, they had toilet paper in their ears to block out some of the noise. So my husband and I talked about this. ‘We should really be selling earplugs.’”

The duo looked for capsule models that would fit earplugs. “It’s also great because once you’re done using the earplugs you can store them in there and use them later. That’s great for the environment.” The business went through two iterations. From concept to functioning vending machine where they are today, was about a year and a half’s work. 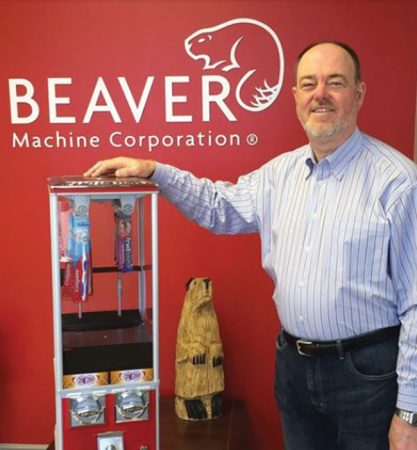 Beaver Vending liked how the nostalgic element of capsule dispensers could have a new use for adults.

Whut!?’s goal was to make their product look fun and appealing, and the couple settled on Beaver Vending’s capsule dispensers. “Their product is rock solid, they’re very helpful,” enthused Davis. “I even visited their facility with my husband who’s also my business partner, and they were great. They showed us around. They’re definitely a leader in that industry so I’m happy to work with them. They’re also Canadian which is great,” added Davis.

Whut!?’s appeal lies in its practicality, portability and affordability. “Earplugs are a product that anybody can use, male, female, young, old, you know, people from all different walks of life. And it’s inexpensive and accessible so it made a lot of sense.” Davis immediately saw the gap in the market and made her pitch to nightclubs. “In the entertainment industry, you don’t really hear a lot about health and wellness. So this was a way to make a good crossover and include that industry in that new trend.”

Beaver Vending for their part were curious as to what their machines would be used for. Primarily, the vending company’s Northern Beaver Series is used for toys and candy, but the company expressed enthusiasm for this novel (and healthy) application for their machine line. “They thought it was really cool,” added Davis.

Stefanie Lock of Beaver Vending recalls meeting the founders of Whut!? “We’re getting more and more requests from people wanting diverse products, now. It’s not just little toys for children anymore. It’s all sorts of different products for more adult uses as well.” Lock adds, “I think a lot of operators are finding that if you know what you want and what you’re looking for, there is a lot of good equipment out there.”

Whut!? Works with the club or venue’s management to find the ideal location for the machine. “I usually like to place them in an area where both men and women, or anyone who identifies as either can have access,” explained Davis. “Putting them in a washroom is a bit limiting so I usually put it either near the ATM, which is great, or near the washroom, like, just outside, near the coat check or near the entrance. Our product is to enhance people’s experience so we don’t really want to take away from the club’s identity. It’s right there to enhance people’s fun.”

Noise Induced Hearing Loss (NIHL) is the most preventable form of impairment. It’s a gradual, cumulative decline in auditory function. Fifty years ago, experts suggested that damage risk criteria be set for music, using temporary threshold shift (TTS) measurements. TTS is known to increase in constant noise in direct proportion to noise; a 2008 study in the McGill Journal of Medicine cited several studies of musicians who experienced hearing loss due to concerts.

“A Study that examined a group of 139 rock and jazz musicians found that 74 per cent suffered from one or a combination of multiple hearing disorders; hearing loss, tinnitus, hyperacusis distortion, and/or diplacusis (hearing the same tone at two different pitches) with the first three being the most commonly reported disorders. (Kahari K, Zachau G, Eklof M, Sandsjo L, Moller C. Assessment of hearing and hearing disorders in rock/jazz musicians.)

Davis states that so far, the response to both whut.club and the earplug vending machines has been “overwhelmingly” positive. “In the past week I was on the radio [Newstalk 1010] talking about earplugs. So, we’re thrilled about it, and my husband and I have expansion in the works. We’re growing. We’re going to expand all over Ontario and Canada, and that’s what our what we’re working on right now, we’re thrilled.”