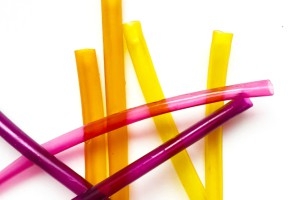 Competition for creating sustainable containers and cutlery to reduce plastic waste is heating up.

Makers of the Loliware line of edible cups, announced their hyper-compostable, edible drinking straws, the Lolistraw. Made from seaweed and sugar, the straw can be used in both hot and cold drinks and eaten after use. If discarded, the straw can biodegrade easily. Meanwhile, U.S. company, Squire Boone Village produces the similarly-named Lollistraws, edible drinking straws made of candy to use in soft drinks and cocktails.

While Lollistraws are made expressly for sweet, cold drinks, Loliware co-founders Chelsea Briganti and Leigh Ann Tucker have created an edible alternative to single-use plastic stir sticks often used by food vendors. Stirring stick options come in two flavours, caramel and vanilla. The aim of their products is to reduce the 500 million plastic straws that are used daily in the U.S.A.

Loliware boasts its products are “gluten-free, gelatin-free, BPA-free, non-GMO, all natural, non-toxic, safe, and FDA approved.” Designed to be eaten after use, both cups and straws can be eaten, or will biodegrade safely and quickly if discarded.

For vendors who want to offer a lower-sugar alternative that still reduces plastic, an Indian company named Bakeys.com offers edible spoons. These vegan spoons are made from a sorghum, wheat and rice flour mixture that, while vegan, are not gluten-free. According to Bakeys website, the company will eventually offer a gluten-free version.

Bakers founder Narayana Peesapaty designed his edible spoons to complement a wider range of use in disposable cutlery; the savoury and plain spoons can be used for spicy main courses, milder, rice-based dishes and desserts. All spoons are made without fat, preservatives, artificial colour or milk products. According to the company website, they plan to expand their production line to include forks, salad plates and chopsticks in the future.

Peesapaty’s product appeared in The Wall Street Journal as well as on Forbes. The former scientist was concerned about the amount of plastic waste that found itself in landfills and in the ocean, and took it upon himself to find an edible option that wouldn’t dissolve too quickly in hot liquids, but would still remain biodegradable.

The challenge in creating biodegradable wares lines in production and material costs. Some startups are concerned about finding a sustainable option to source material, and others are more concerned with flavour or texture. Cool options like flavoured drinking straws and edible disposable tableware appears to be a hot commodity for all.