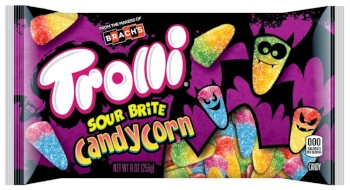 The awards were carefully selected from a panel of more than 20 judges comprised of leading retailers, wholesalers, trade media, trend spotters and food industry experts who evaluated more than 350 products before the show.

Each product is evaluated based on the following factors: innovation, taste, packaging and ability to sell.

“Trolli is doubly thrilled and honoured to be recognized for two awards by the NCA,” said Greg Guidotti, General Manager, Non-Chocolate, at Ferrara Candy Company in a press release. “We’re excited about our new innovations inspired by the weirdly awesome world of Trolli, including Sour Brite Crunchy Crawlers, which will be available in early 2020, and Trolli Sour Brite Candy Corn, which will be available for the Halloween season. We’re pleased to see excitement from the judges and candy industry for these products as we head into the number one season for candy buying.”

“Best in Show” award winner Sour Brite Crunchy Crawlers is Trolli’s latest innovation and features a dual-textural spin on Trolli’s classic sour gummy worm that delivers a thin, crunchy shell and a chewy, fruity centre. The innovation is a springboard off the success of Sour Brite Crawlers – which is growing at 4X the category – and research findings that consumers crave multi-sensorial excitement in non-chocolate candy. The Crunchy Crawler innovation features watermelon/strawberry, orange/raspberry and cherry/lemon flavour combinations and will begin rolling out in December 2019.