Features Business
The Art of the Pivot 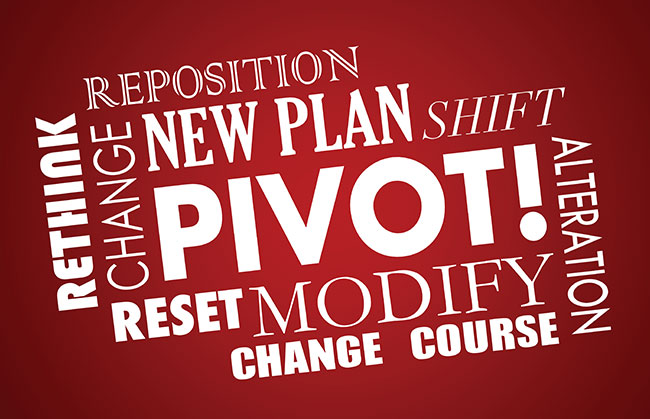 The pandemic has changed the way people do business, and set new rules in place for vending operators. Photo credit: © iQoncept / Adobe Stock.

When this article was written, lockdown was in its sixth week. Darrel Fraser, the president and owner of Definite Food Services & Bluenose Vending Services spoke with Canadian Vending and Office Coffee Service Magazine about staying afloat. He shared his experience, discussed what these uncertain times mean, and what a vending operator can do to stay in business.

“Our sales are down 70 per cent. What we’re servicing now are essential services. We’ve worked with clients to ensure when we come to their break rooms that all our guys are wearing gloves and masks,” explained Fraser. “They do the same and we don’t have more than five people in the room at a time. It’s really about working with our clients.”

Fraser knows the value of rapid and clear communication, “A lot of our accounts are an hour away from our office so we ensure that we’re going to be allowed to come in,” he explained. “We’re not doing any new business solicitation at this stage. In fact, anything we had on the go, we mutually agreed to put on hold until after things settled, so we can later visit face-to-face and make decisions. So we’re really trying to survive, if you wish.”

Definite has pivoted to service industries that support food transportation such as the Halifax Shipyards and even the Michelin Tire Company, “We currently have trucks on the road only two days a week, sometimes three,” said Fraser of his dramatic pivot. “We’re trying to keep everybody employed to some degree.” He has made applications for government assistance. “We haven’t fully received funds yet. But I must give credit to the Government of Canada and the province of Nova Scotia for trying to help out small business get through this.”

Despite the downturn in business, Fraser refers to himself as “quite fortunate,” as the lockdown occurred when universities would be shutting down for the summer anyway.

His sympathies lie with smaller companies that didn’t have a larger customer base, or had a narrow profit margin. “There’s a lot of talk about a lot of businesses that will not reopen. That remains to be seen, but I’m confident we’ll survive. It may never be the same. But we will survive for sure.”

Part of Definite’s survival strategy involves supply management, and repurposing what can’t be sold. “When we’ll get government assistance, we’re not going to be in a situation where we’re stretched so thin that we need every penny to make it work. Most of us just stretch out the product as much as we can. Some products are just sitting there and won’t be used unless we take it to out reuse it. So, we started emptying those to use elsewhere.”

Getting to unused machines in some cases could involve going into a building with uncertain hygiene or no rules for social distancing, but Fraser values his employees’ health. “Working as a group, my team has been incredible. People are only working two days a week, but they’ve been more than understanding and willing to step in wherever. If they don’t feel comfortable going into any location, they have permission to turn around and walk away. And it’s been good. We’ve had no infected people to date. Knock on wood.”

A saving grace, Fraser noted, was cashless sales. He states they have taken the initiative to use this downtime to upgrade older machines to cashless options. “We see substantial difference between snacks where cashless is available, sitting alongside a pop machine, where there is no cash. As we continue to upgrade, we focused on snacks first because we own those machines. Now we’re doing the Pepsi vendors. One day it will be totally cashless, I’m sure.”

Fraser’s optimism in the future lies in his focus on the present. He has applied for government emergency funding, such as CERB, for his employees. “Some of the people we’ve laid off, they received their first payment. The other loan we applied for is the $40,000 government guarantee loan that you have almost a year and a half, two years to pay off. So we’re waiting for approval but the application’s made.” Fraser also applied for the 75 per cent wage subsidy program for his staff.

“It’s really trying. What doesn’t kill you makes you stronger. And I think this will make us stronger,” Dan says, hopefully.