The Brew Centre of Brampton, Ont., is built by family, run by women and proud of it! 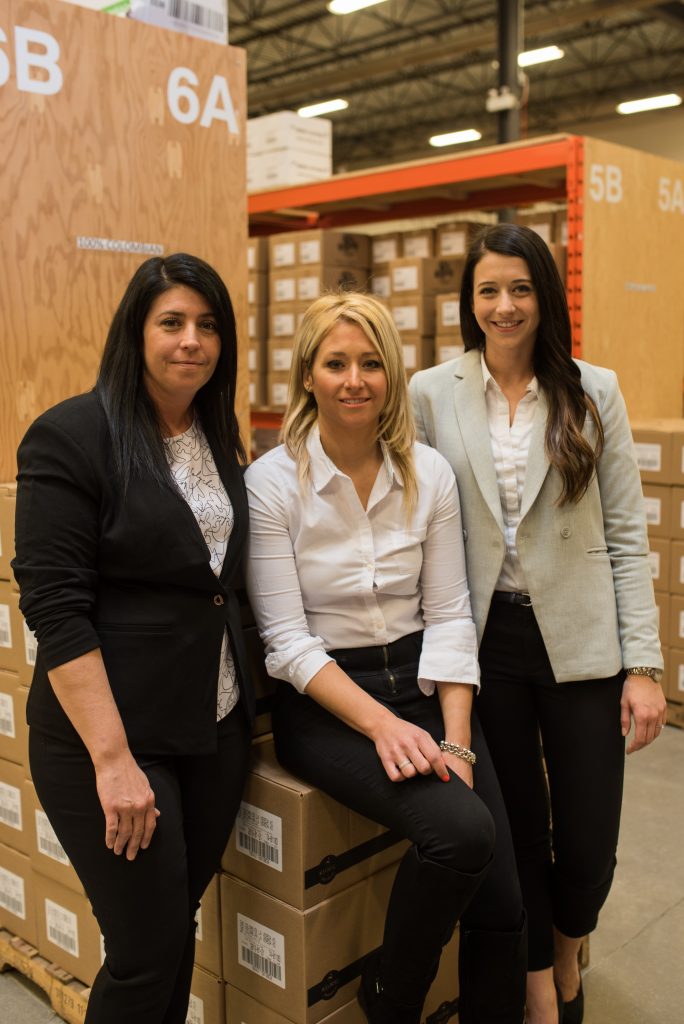 Corrigan sisters Laurie Jacqueline and Renee run the company as an efficient team.

The Brew Centre of Brampton, Ont., has a history as rich as any Colombian coffee sold there, but it also has a fresh new look and approach.

The successful vending and office coffee service business started life in 1989 as Canteen Refreshment Services, the OCS division of Canteen of Canada. David Corrigan, who was then vice-president of the parent company, acquired the division and re-established it as Direct Coffee Service.

In 2000 Brian Martell reported in Canadian Vending on the respected family company’s early years and expansion to a 6,400-square-feet location at 235 Admiral Blvd. in Mississauga.

Fast-forward to 2017 and the company is now rebranded as The Brew Centre.

David, now semi-retired, has passed on much of his wisdom and business acumen to daughters Laurie, 40, Jacqueline, 37, and Renee, 28, who run the company as an efficient team.

It seems a good time to revisit this growing enterprise as it starts to reap the rewards of being in its spacious new digs at 2600 Williams Pkwy. in Brampton.

They opened the new location in the early days of 2016, when they officially took their new name. The 30,000 square feet of office and warehouse space – including a night delivery room – is making day-to-day operations smoother. “We designed it ourselves,” says Renee, who is operations manager and the family’s spokesperson for our interview. “This way everything and everyone is in one place. It’s convenient and efficient – more practical,” she says.

The extra space and new layout are needed to keep up with The Brew Centre’s growth. The numbers tell the story: in 1991 sales were at about half a million dollars; in 2000 they had quadrupled to about two million; by 2016 they nearly quadrupled again to about seven million.

There are now four distinct pillars to the business: OCS, filtered water systems, vending and the retail store.

In 2000 the business was split 60-40 between OCS and vending; now it’s roughly the same composition but with a couple of significant developments: the separation of water systems into its own division and a decisive pivot toward direct hot beverage sales and equipment to the public.

“We saw the industry changing, so we went broader,” Renee says.

Because the market is changing rapidly, keeping up on the trends and what’s popular can be a challenge, Renee says.

The demand for online ordering is a case in point. “Everything we sell is available online or by phone. Service is our number 1 priority and we’re proud of that,” she says.

As for their retail customers, they see a good overall mix with lots of female customers, a growing number of whom are between the ages of 30 and 50.

Water systems are another important aspect of the business. Tastes in water have changed over the years, and the jugs Renee remembers as commonplace when she worked in the business as a teenager around 2007 have given way to even more advanced point-of-use cooler systems.

They plumb all water coolers directly into clients’ existing water sources, filter the water using high-quality cartridges and deliver it at room temperature and chilled.

Plumbed-in units are an advantage because they don’t require storage space for full or empty bottles, lifting or transporting and there is no risk of tampering or contamination, the company explains on its website.

On the office coffee side, they carry about 20 brands and a dozen countertop brewers, including four traditional systems, single-cup brewers and espresso makers.

They have a well-developed refund policy involving refund booklets. If there is a problem with any machine, staff can have their money refunded on the spot with a vending float. Brew Centre service staff collect the refund slips and replenish the float on a regular basis to ensure the client’s staff is not out of pocket and keeps their own staff aware of problems at all times.

It’s a family affair
David and Silvana Corrigan built a strong foundation for their business and taught their daughters well. David imparted a smart business sense and professionalism, and Silvana, who for many years handled financial administration, served as a strong role model for the three businesswomen.

“Our dad has pushed us to be strong businesswomen,” Renee says.

Jacqueline is in charge of accounting, Laurie customer service and Renee operations. The sisters started from the bottom of the business and have worked in every sector of the business, including e-commerce direct sales to the public.

Renee articulates some of the challenges they’ve faced as women in the business. “This industry has been dominated by men for many years. All three of us have had challenges in dealing with suppliers, customers and staff – having to prove ourselves to gain the same respect my father was given.”

Her advice to other women entering the field is to be confident, assertive and knowledgeable. “We have never been intimidated because we are familiar with every aspect of the company, whether it be plumbing in coffee machines or repairing vending equipment.”

Of working with her sisters all day, she says, “I love it! I don’t know how people don’t work with family. We each have a piece we excel at, so we complement
one another.”

The Corrigans are firm believers in being involved with the industry as a whole. David served on the Ontario Coffee and Vending Service Association (OCVSA) for a decade and the Canadian Automatic Merchandising Association, the latter of which awarded him the CAMA Stuart Daw Gold Service Award in 2005 in recognition of his “entrepreneurial leadership, dedication and professionalism.”

“We love the industry,” says Renee, who remembers going to every trade show and now serves on the CAMA board of directors herself. She says it’s been a great experience for her, helping her to learn about the industry.

In 2000, when Canadian Vending last checked in, the company had 10 employees. It now has about 30 in the office and in 17 trucks on the road. Some employees specialize in coffee or vending while others are involved in both sides. “We are in the service business,” Renee says.

Their size and their heart may be their greatest secret weapons as a company, Renee says. “It’s a big operation based on family values. We know a lot of our customers.”

“We still have that personal touch, staff go door to door, and we encourage everyone to make that personal connection,” Renee says, adding that it’s easier to understand customers’ needs if they are there in person on the premises.

“You get to know the community.”

Corrigan sisters Laurie Jacqueline and Renee run the company as an efficient team.

Is coffee recession-proof?
While she stops short of predicting the future, Renee does not envision the popularity of coffee waning significantly. “Currently, single cup systems dominate our sales and drive consumption to new heights,” she says.

Now there are specialty beans, a wider range of roasts and a wealth of flavours. “I can see the trend continuing.”

They have recycling program and among their many lines carry products that are compostable. She says that although there aren’t a great number of customers requesting compostable products, customers are more inclined to choose compostable if given the option.

As far as trends go, espressos are especially popular and it’s become more important than ever to have fast machines.

Some of their vending machines are cashless, Renee says. Coins are being used less often than even 10 years ago and the Corrigans have seen an incline in people using cashless methods. “It’s a new generation carrying less and less cash,” she says. “My dad once asked, ‘Who would buy a chocolate bar with a credit card?’ I told him, ‘I would!’

“People are using cashless payment more and more often as they gain confidence that it will work.”

What’s next on the horizon? “The focus is on growth. We know we can grow substantially. We are now operating in every sector.”

With four grandkids aged 9 to 14 in the family, it seems likely some will want to carry on The Brew Centre’s the family tradition.

For now they work and play together, enjoying one another’s company. “We spend time together after work,” Renee says. “I know that might sound cliché but it’s true.”

This story has touched on four pillars, or sectors, of the business, but it’s fair to say the true pillars of this growing family business lie in its mantra of “quality, products, service and excellence” – priorities that promise to take them far.