Commitment. That’s what Bernie Schwarzli would like from bulk operators in North America.  Schwarzli doesn’t even seem to be too concerned if operators made a
commitment to one of his continental competitors; he just wants the
industry to take a stand and support the North American manufacturers. 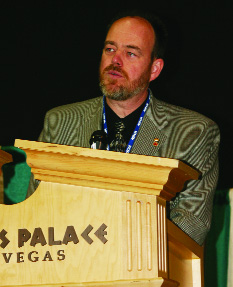 Commitment. That’s what Bernie Schwarzli would like from bulk operators in North America.

Schwarzli doesn’t even seem to be too concerned if operators made a commitment to one of his continental competitors; he just wants the industry to take a stand and support the North American manufacturers.

Schwarzli, president of Beaver Machine, spoke on behalf of the manufacturers at the 56th annual National Bulk Vendors Association Expo in Las Vegas. With his associates sitting at his side, Schwarzli painted a dreadful image of what the bulk industry might be facing if collectively operators and manufacturers continue to allow the “Asian tidal wave” of imports.

Equipment manufacturers are exasperated at the influx of shady imports from the Asian market. Schwarzli said those behind the trend are “pros” at duplicating the North American-designed machines, even to the point where they are copying the logos and parts numbers on their illegal knock-offs.

“Competition between the manufacturers in North America has always been healthy between us. But the playing field is no longer level,” he said during a session at the Expo. “We’re being pounded by the Asian tidal wave … they have become pros at duplicating our products and selling them all over the world.”
Schwarzli said the people behind the knock-off machines erode the manufacturing base, and hurt further innovation and development.

“(They) do not supply new products, they do not invest huge amounts of cash in product development … and they have forced the North American manufacturers to re-evaluate the decision to invest and develop new products. Without the support of the North American operator, we cannot recoup the hundreds of thousands of dollars we have lost.”

The problem is, as Schwarzli explained, for every shipping container of fraudulently made machines that are uncovered by customs, there are many more that have made it into North America … and operators continue to buy them.

In a rare move, Schwarzli told the audience exactly how much his company invested in the development of one of the latest offerings – the lollipop crane. Beaver spent over $1.1 million to bring it to market, and $600,000 on their popular Meridian series.

But, he warned, if the industry does not take note of the seriousness of the Asian threat, such continued development will not continue.

“New and exciting products mean growth … but there has to be a supplier commitment from the operator.”o