WASHINGTON (AP) – The truth is bittersweet: something in cocoa beans
may be good for your heart, but – sigh – that’s still no reason to load
up on chocolate bars or brownies.

WASHINGTON (AP) – The truth is bittersweet: something in cocoa beans may be good for your heart, but – sigh – that’s still no reason to load up on chocolate bars or brownies.

The health potential is real. Cocoa beans have natural compounds called flavanols, and a growing pile of scientific research suggests they do good things to blood vessels.

Despite recent consumer enthusiasm over chocolate’s rumoured benefits, flavanols are missing from much of the chocolate today. Flavanols make chocolate and cocoa taste bitter, and confectioners have spent years trying to perfect ways to remove the pungent flavour.

“Most chocolate, in fact, isn’t flavanol-rich,” said Norm Hollenberg, a radiology professor and flavanol expert at Harvard Medical School. “But all chocolate is rich in fat and calories. Chocolate is a delight. It can and should be part of a prudent diet. That means you limit what you take.”

Flavanols are found in other foods, such as red wine, grapes, apples and green tea, although cocoa beans are a particularly rich source.

They are so tiny that they cannot be seen, even under a microscope. To find them, it takes sophisticated machinery that seems more appropriate for NASA than a chocolate company’s laboratories.

Mars Inc. developed the technology to visualize flavanols on a computer screen. Says Harold Schmitz, the company’s chief science officer: “Now we understand cocoa well enough to start to do new things with it.”
The company is starting with CocoaVia granola bars, made with a special cocoa powder that retains most of the flavanols. The bars also have plant sterols, which have been shown to help lower cholesterol. 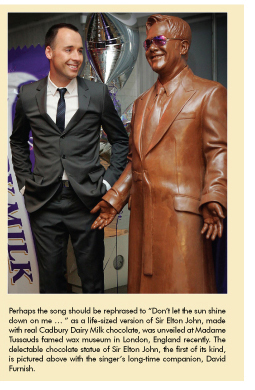 Researchers are excited by the potential of flavanols to ward off vascular disease, which can cause heart attacks, strokes, diabetes, dementia and hypertension. Vascular diseases are linked to the artery’s inability to make a simple but fundamental chemical called nitric oxide. Flavanols appear to reverse that problem.

“The pharmaceutical industry has spent tens, probably hundreds of millions of dollars in search of a chemical that would reverse that abnormality,” Hollenberg said. “And God gave us flavanol-rich cocoa, which does that. So the excitement is real.”

The Kuna drink a lot of cocoa, and they don’t have high blood pressure – except for those who move to the mainland and start drinking commercial cocoa that’s flavanol-poor.

Testing the link between flavanols and improved blood flow, Hollenberg fed cocoa with and without flavanols to a study group in the United States and discovered that flavanols seemed to improve blood flow throughout the body.

Another researcher, nutrition professor Carl Keen at the University of California, Davis, has found that flavanols had an aspirin-like effect on blood, among other findings.

Mars announced last month that its scientists have figured out how to make synthetic flavanols and that major pharmaceutical companies are interested in developing the compounds for prescription drugs.

The company contributed to Hollenberg’s and Keen’s research and several other projects. To date, Mars has collaborated on more than 80 studies.

Owned and controlled by the Mars family, the U.S. packaged foods giant is one of the world’s biggest private companies, with annual sales estimated at $15 billion US. In addition to its globe-spanning confectionery brands Snickers and M&Ms, the company is also one of the most important worldwide manufacturers of petfood, and manufactures easy-cook rice and rice-based meals under the Uncle Ben’s umbrella. It loses out to Hershey, however, as North America’s leading chocolate marketer, although Mars has a wider global spread and M&Ms are the world’s leading confectionery brand.