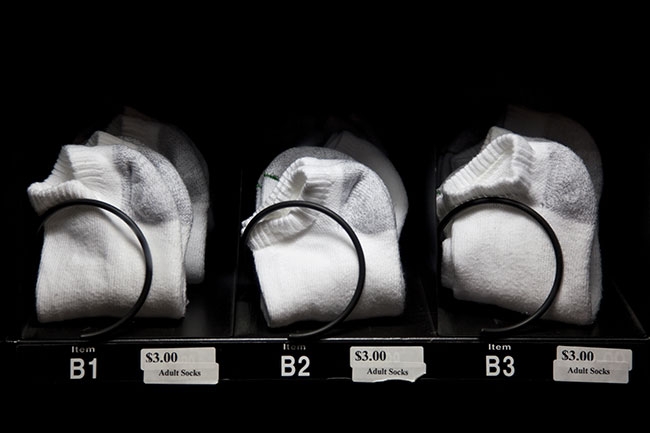 Clean socks sold from a bowling alley’s vending machine is a great example of filling a need in a market. Photo: Adobe Stock

Today’s vending machines are not just about impulse purchases. Lorna Kane, of Kane’s Distributing has been watching the trends come and go, and noticed that the machines are being used by entrepreneurs who test out their products through automated sales.

Due to machine’s comparatively lower cost to operate than a boutique with staff, vending machines are not just the 21st century’s answer to micro-boutiques: They are being used as advertising tools for start-up companies.

“We have had a lot of customers in the last couple of years who have been coming to us for using vending machines for marketing. Whether it’s just a six-month event that they would need the machine for or longer, but they’re going all out with custom wraps, and using them as promotion tools, going through the malls, things like that. It’s kind of neat to see the different graphics that these people come up with.”

Millennial start-ups are drawn to vending machine’s versatility. If it’s not being used as a device that dispenses actual products, Kane notes that the machines’ presence itself can be a lure to a potential sale. Starting a pop-up store can be expensive to rent or lease, decorate and safeguard its inventory. Unlike a bricks-and-mortar location, a vending machine has mobility among one of its many advantages.

“Toy companies use the machines to go around the malls, and they will quite literally be in one mall for a weekend, then they will move to the next mall and the next one and the next one. They just bring this vending machine as part of their tool in their booth just to draw people’s attention. They’re just using it as a giant banner. That’s kind of interesting, we’re seeing more and more marketing agencies coming to us for custom graphics.
Some only want it for a few months, and a few months later, we’ll just create new graphics for the whole machine again for a totally different customer: They’ll just have a sales team in a booth.”

Nick McLaren of Langley Wholesale adds that vending is no longer a solely urban fixture. He helped install a vending machine for a picturesque chicken farm in Agassiz, BC. Misty Mountain Farm dispenses farm-fresh eggs out of its egg vending machine, which keeps the eggs cool. The machine is located inside a large shipping container on the edge of property, set against the stunning backdrop of the Rocky Mountains. “We did quite a lot of testing,” states McLaren. “Eggs are not an easy thing to vend.” The machine is cashless and set up with a USI elevator to gently lower the egg carton to the client. Dozens of eggs were tested to make sure none would get broken. And none were. “This project stood out because it was something that wasn’t done before,” adds McLaren. “I like it when people think outside the box.”

The egg vending machine was the first of its kind in Canada, and the Poortvliet family had seen something like it in Europe and wanted to try it on their farm, and approached Langley Wholesale with their vision. This saved time for the family to focus on the farm and not roadside sales. “They’ve got a Nayax system taking credit and debit and they’re selling eggs out of this vending machine,” laughs Kane as she describes the farm’s setup. “And it’s just in the most stunning view you’ve ever seen.”

Clean socks sold from a bowling alley’s vending machine is a great example of filling a need in a market.

Kane explains that another advantage in vending machines is their mobility. If low sales are due to poor foot traffic, the machine can be moved to a more popular area. With features like telemetry, a vendor’s route is shortened further. She speaks of a vendor who went “completely cashless with telemetry, so he can monitor his machines…he can look in and see what kind of inventory he needs and visit it when he needs to visit it.” This eliminates scenarios where a vendor would visit a machine to discover that it’s not empty, or it is empty and the wrong product was brought to fill it.

New uses for vending machines are cropping up, fueled by new technology and imaginative vendors. PizzaForno is a 24/7 pizza vending machine that takes your order and bakes it within minutes. Located in downtown Toronto, this machine solves the solution to short lunch breaks for office workers looking for a hot lunch.

Frankly, in this day and age, if we didn’t think outside the box, we wouldn’t be around. [The vending industry] needs to expand and we need to grow and look outside traditional vending to sustain ourselves.”

The vending industry relies on more than the latest technology; Kane attributes her company’s success with key communication and a solid network. “Our VendIT system was probably our biggest success with our inventory solution…We’ve got a great distribution network which to us, as a distributor, is key. We need good distribution because we can’t be all over the U.S. and Canada, so it’s really important to us to partner.”

Kane ads that having key partners in various locations helps vendors who want to have devices in multiple provinces or cities at other ends of country at the same time. “It’s great to have a really tight network.”

From charities, book vending, Tshirts and fresh produce, the vending market is poised to help the start-up company in launching their product or initiative. “There’s nothing you can’t do,” marvels Kane. “We’ve got a customer, a father and son team, whose business is called Portions. They sell fresh made salads out of salad vending machines in fantastic packaging. Whatever you want to put in a machine, you can: It’s all about location and the market. Just keep an open mind, really.”