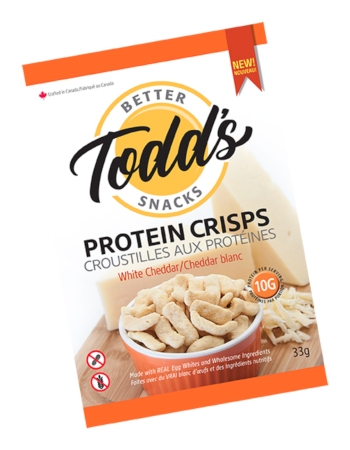 The 10th place winner of the SIAL Innovation Award, Todd’s Better Snacks collaborated with George Brown College and Evova to work on the flavour profile of the egg-white based snack. The result is Todd’s Protein Crisps.

Evova Foods had partnered with George Brown College’s Food Innovation & Research Studio (“FIRSt”) on a project to  engage in optimization of their products. Todd’s Protein Crisps contain 2 whole egg whites per serving.  They’re also gluten and peanut free, keto and paleo friendly, as well as being a low carb option.

Evova Foods Inc. is a Saskatchewan-based company specializing in low-calories, high-protein snacks that makes use of egg whites.

The Keto-friendly snack was among the top ten finalists at the SIAL Innovation awards. The puffed snacks are available in four flavours, Sour Cream & Onion, Barbecue, White Cheddar and Sea Salt & Vinegar.