This collaboration between Post Consumer Brands and Hostess Brands can be found in stores starting December.

Post Consumer Brands and Hostess Brands, LLC are teaming up again to bring the iconic Twinkies™ brand to the cereal aisle. The new Post Hostess™ Twinkies Cereal is a delicious new way to enjoy the snack cake we all know and love in cereal form, giving fans another opportunity to satisfy their cravings. 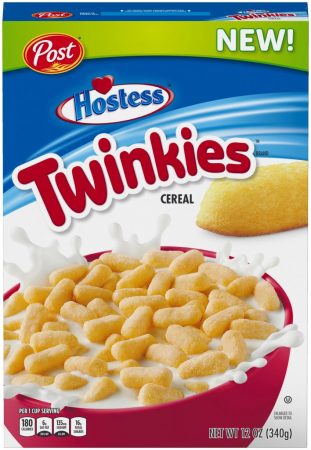 “In developing a cereal version of the iconic Twinkies, our top priority was focused on delivering the great Twinkies flavour in each bite,” said Josh Jans, Brand Manager of Cereal Partnerships at Post Consumer Brands in a press release. “Knowing that taste remains the No. 1 purchase driver of cereal, we conducted multiple consumer tests, and the new Twinkies Cereal delivered. We think fans will find that it not only tastes great with milk but also outside the bowl.”

TheTwinkies snack cake, which has been around for nearly 90 years, has made its mark on pop culture through major milestones in American history. From its birth during the Great Depression to being included as an American keepsake in the 1999 National Millennium Time Capsule, the Twinkies snack cake became an icon. Considering the outrage spurred in 2012 when Twinkies ceased production and their much-celebrated comeback in 2013, it’s no surprise that Twinkies rank highest in consumer loyalty among Hostess brands.

To find a store near you carrying Post Hostess™ Twinkies™ Cereal and other Post cereals, visit https://www.posthostesscereal.com/.