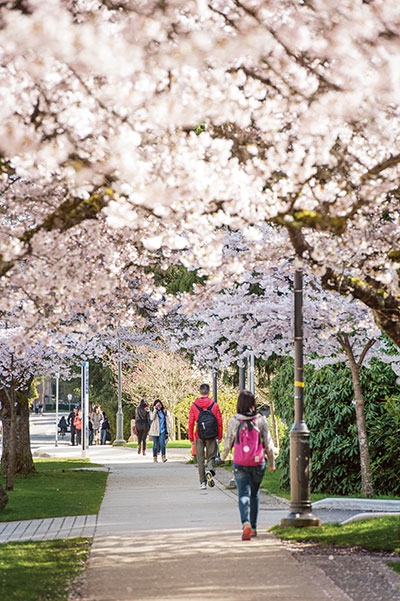 There are a lot of things for an average university student to worry about: classes, grades, labs, part-time jobs, bus schedules.

There are a lot of things for an average university student to worry about: classes, grades, labs, part-time jobs, bus schedules. A new service was rolled out in the last fall on the campus of Vancouver’s University of British Columbia, aiming to make life a lot more convenient for the 40,000 students scattered about the 993 acres of the campus.

It all started with one vending machine that allowed students to purchase items with just their student cards.

“It was at Marine Drive Residence Housing; it probably houses 1,700 students,” said Victoria Wakefield, purchasing manager for UBC’s student housing and hospitality services, of the machine that went live in the fall of 2013. “The reason we chose that machine was because it was closest to our office. There was no science to it.”

Wakefield said the machine was in a common area, and that it was unveiled with relatively little fanfare – just a sticker already commonly found on campus, telling students where they could use their student cards for campus purchases.

“Within two weeks we hit a double-digit increase and we were really surprised,” she said.

“The return was almost immediate. We started moving forward. One of the delays was that VendMaster was having trouble getting swipe card readers (from the manufacturer). As soon as the readers came in, we rolled them all out, within a month. Everything was live by the time students came back in August.”

Since then, the increases have kept on coming from more than 60 campus snack machines. Wakefield said that vending sales have increased into the double digits, by around one-quarter. (It should be mentioned that though UBC has their Okanagan campus in Kelowna, B.C., they have a different vendor there, so the cashless student card vending does not apply to the second campus.)

“The university wanted to go more cashless,” said Colin Creed of VendMaster, UBC’s vending company. “We jumped right in, found the technology, worked with Apriva and got it to work. This is really important to the university. It’s been a very positive and good experience.

It’s not just drinks and snacks, though. Some of the UBC machines are customized, too; as the residences turn into hotels in the summer, there the vending machines can contain travellers’ essentials, like razors, toothpaste and laundry soap.

“We grew in double digits without even marketing it,” said Wakefield. “It wasn’t a big launch, just the sticker. It’s shockingly successful and continues to grow. And the cost per machine is nominal, less than $1,000.”

“We thought we’d increase five to eight per cent. There are 34 food outlets on campus and little mini-mart stores. (The cards were) a convenience item, but not a priority item.”

Perhaps it’s the convenience, perhaps the students find it easier to spend credits from a card rather than spending cash on hand, but the increase that Wakefield is currently experiencing is a pure increase. The profit gained from the convenience of the cards did not cut into the straight cash purchases of the machines.

DeRosse said that, from his end, he was expecting an increase in the neighbourhood of 20 per cent.

It should be mentioned that UBC staff and faculty can use their own credit cards on the machine, but that if anyone is, say, attending a conference on the campus for more than a few days, they are issued a temporary card they can use on the machines. The cards themselves are similar to many other student cards across North America; they’re almost like a Swiss army knife with all of their functions.

“When a student starts, they are assigned a student ID number and issued a card. It’s a security card, an ID card, they can access their rooms, laundry rooms, get into their buildings, access photocopies,” said Wakefield. “It’s an access card for everything including their meal plan. The students on campus use it for currency as well.”

Though there is no PIN involved with the ID card, the card has a picture of the student on it. If a card is lost, the student merely calls it in to deactivate it.

Wakefield had the idea to set up a type of student card vending program and approached several companies to get the ball rolling. Apriva was the one that stepped up. The whole thing happened quickly.

“Campuses are very critical; we have a whole division that looks at campuses,” said Apriva’s DeRosse. “We’re in over 300 campuses.”

“Once Apriva connected with us, we were running our first test pilot three weeks later,” said Wakefield. UBC’s vending company, VendMaster, was on board with it, too.

“I work with a local snack vending company, a small-business owner, and he said sure, I’ll try it,” said UBC’s Wakefield of VendMaster.

“I told them that if I can find a way to do it, I’ll do it,” said VendMaster’s Creed.

“This is a pretty new technology,” said Creed. “VendMaster has been doing credit card payment in vending machines for the last three years. This is different; UBC had its own system. It’s a fairly new concept that actually works.”

But along with the profits come other benefits, like the information collected by the machines that’s now available to the UBC operations branch.

“We get a look at our own purse,” said Wakefield. “Before, we were at the mercy of reporting from the vendor, a relationship of trust in knowing what our sales were. Now, we can see what is selling, what isn’t, what the volumes are, and the trends in sales monthly. A verification of what activity is happening and we can view the transactions instantly, hourly, daily and pull activity reports at any time.”

Judging by their success and their adoption in the rest of the world, cashless vending may become a more common thing on Canadian campuses.

“The one-card solution is nothing new,” said Wakefield. “In Asia and Europe, Smart Card technology is widely disseminated. The most strategic decision for success was aligning with a partner that could make it happen, and that’s Apriva. (With) three other companies, we were knocking on their door for the better part of three months. (Apriva) got on an airplane and flew out to meet us.”

Wakefield said the initial planning took place last summer, the trial machine was operational in about three weeks, and the increased revenues were recognized within the first month trending at 28 per cent increases over previous months. UBC and Apriva were then invited to present at the CAMA Expo in Vancouver in October 2013 to share their story of success.

The immediate success of the project has led to other positive benefits. VendMaster’s Creed has picked up on a thing or two.

“It’s funny, recognizing what areas are better for cashless than not,” he said. “Libraries and lecture halls, places where people are late at night, that’s where cashless seems to be driving. And residences. Anywhere where people congregate after hours.”

Creed has also taken to appreciating another aspect of the new technology.

“If we can see our sales over the web, then we can stock machines that are busier than normal. We can reschedule to get that done when it needs it, rather than when we can do it,” he said. “Over the next few months, I’m deploying over 100 machines with telemetry. We’re growing. And we’re getting these accounts I think because we’re utilizing the modern technology that’s available.”

“The success of card enabling in vending has allowed us the optimism to expand to other areas,” says Wakefield, who is also now talking about moving forward with student card-enabledw mailboxes. “We’re one portfolio within a large campus. It heightens our exposure on campus. Law (department) is coming to us, research (department) is coming to us.”

And ultimately one of the most important stakeholders at UBC is left satisfied.