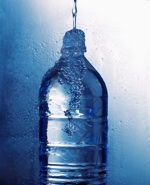 UnBottle it Canada!
London, Ont., city council passed a resolution calling on the Federation of Canadian Municipalities to urge all municipalities to phase out the sale and purchase of bottled water where appropriate.

The resolution was an outcome of the Council of Canadians and CUPE Ontario's province-wide tour to encourage bans of bottled water in municipal and provincial facilities, which was in London last week. The 15-city speaking tour, which arrives in Kingston tonight and Midland tomorrow, features Maude Barlow, National Chairperson of the Council of Canadians and Senior Advisor on Water to the President of the UN General Assembly, and Sid Ryan, CUPE Ontario President.

The bottled water industry sells water – a shared public resource – for huge profits, undermining our faith in public water. The Unbottle It! speaking tour is providing communities with information, and helping them "tap into clean, safe public  drinking water." Background information and a full listing of cities in the tour and cities that have already banned the bottle are available at: www.unbottleit.org.

Council of Canadians chairperson Maude Barlow thanked London City Councilors last week for sponsoring the resolution to the FCM. "The London Council has already shown incredible leadership," she said. "Through this resolution we will replicate London's ban across the country." The Federation of Canadian Municipalities will hold their annual conference in Whistler, British Columbia this coming June 5-8. The resolution will go to the FCM just one year after the U.S. Conference of Mayors, representing more than 1100 American Mayors voted to promote tap water and phase out municipal spending on bottled water.