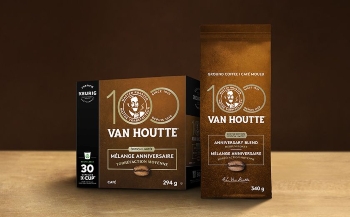 For its 100th anniversary, Canadian coffee brand Van Houtte® had a mission: To celebrate its Master Roaster Albert-Louis Van Houtte, by giving back to inspire others so they may pursue their passion.

Leading up to the Masters’ Fund program, Van Houtte® celebrated its 100th anniversary with a series of initiatives honouring various masters in Canada. The brand kicked off the festivities in December 2018 with Natrel Fire on Ice. This first initiative was followed by a special one-off ad, part of the “Master Roaster. Master of Coffee” campaign, which aired in Quebec.

In the spring of 2019, Van Houtte launched a limited edition Anniversary Blend, specially created and roasted to commemorate this milestone. Toronto was also part of the festivities with a take-over of Union Station last March. Building on this momentum, Van Houtte helped consumers make the most of summer with the Masters’ Recipes, in partnership with renowned local chefs, to salute Canada’s rich gastronomic culture.

“Van Houtte’s 100th anniversary was an incredible opportunity to reaffirm its leadership, propel the brand expression forward, deliver creative brand experiences, engage with our audiences, and position the brand as being in-the-now. And since our consumers are at the heart of everything we do, our approach all year was to bring people together through creative, surprising and memorable partnerships and experiences that are all linked to mastery,” stated Stéphane Renauld, Director, Brand Management, Keurig Canada Inc., in a press release.

The Masters’ Fund is the next and final step in this momentous year. Inspired by Master Roaster Albert-Louis Van Houtte’s passion, the program’s vision is to encourage the masters of tomorrow by awarding $20,000 bursaries to five talented Canadians to enable them to pursue their passion and perfect their craft. Launched on October 30, CBC / Radio-Canada hosted the program at cbc.ca/vanhoutte and ici.radio-canada.ca/vanhoutte, featuring a campaign to share the recipients’ inspiring stories. The goal of this ambitious program is to bring to light the talent and dedication of exceptional Canadians worth discovering.

The bursary recipients are:

“Since its inception, Van Houtte has built its reputation on the passion of its founder, Albert-Louis Van Houtte, which led him to become a master of coffee artistry and roasting. Therefore, with the Masters’ Fund, we want to salute the passion of remarkable Canadians for their unique talents and their commitment to their art. As we aim to bring masters into Canadian pop culture, CBC / Radio-Canada offers us the opportunity to reach millions of Canadians to discover the five bursary recipients. We wanted to collaborate with a media partner who is a master of Canadian popular culture, and whose values are aligned with ours. We are proud to present five Canadians who are passionate about their art and whose journey reflects the values of our brand,” added Renauld.

To make this comprehensive program a reality, Van Houtte chose to partner with CBC / Radio-Canada, a network whose mission is to share inspiring stories. CBC / Radio-Canada will host the program on their website, featuring videos starring each of the recipients. In addition to online videos, the integrated campaign will include a television ad, online and social media ads, and will also be featured on VanHoutte.com. The campaign is launching on October 30 and will run until December 22nd.