With great anticipation, I was making my first trip to China for a speaking engagement. I had been invited to the China Vending and Kiosk Show to talk about what I know the best: vending and office coffee.
Thirteen hours after leaving Toronto, I landed in Shanghai – a city of 16 million (half the population of Canada) with a very modern international airport. On the way to get a taxi, the first thing I saw was a Burger King.

Shanghai has all the sights and sounds of any city in the world; with heavy traffic, construction, and a very long ride from the airport. However, the really nice thing about an hour-plus cab ride was the cost: $25 Cdn, and there is no tipping in China. 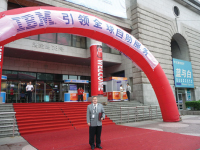 What an amazing society of people. I found they are not what we sometimes perceive or read from our own distorted news media.

After checking into a four-star hotel equivalent to any in Canada, I realized I could be in any city in the world.

I rose at 6 a.m. every day and walked the streets. I felt safe and very comfortable, learning that in this country free enterprise is alive and well. One huge square block had a beautiful park, Pizza Hut and KFC. In the same block, there were many stands, cooking an assortment of foods.

The city really seemed to come alive at 6 a.m., and you can buy anything you desire by 6:15 – food, drink, clothes, newspapers, groceries etc.

There may be only one governing party, but freedom to make money in any form is definitely not prohibited; old and new side by side, not hidden away from view.

After spending some valuable time learning about the people, it was now time to register and attend the China Vending and Kiosk Show.

One warning I received from other travellers was “be careful, don’t eat the food.” Well, anyone who knows what I look like and who understands me recognizes that statement will not happen.

Every morning before attending the show I enjoyed a buffet with traditional flare and it was fantastic.

Again one must experience for oneself, not heed the naysayers who miss many of life’s experiences.

The show had approximately 50 exhibitors, with total show attendance of more than 5,000 people over the span of three days. I was one of five speakers, many of who were talking about everything from vending in Canada to environmental solutions in Europe.

I spoke to over 90 people, with over 85 staying after asking questions for two hours. This was a real indication that there is a tremendous thirst for vending knowledge.

The booth space was divided evenly with full-line vending, tabletop coffee, touch-screen equipment, technical training, etc. Vending and office coffee service may be in its infancy in China, but the equipment is as good or better than what we are being offered today. They have learned in a very short time to produce and operate to customers
needs.

For me, this was a visit to one of the most modern cities in the world, yet I discovered the old ways are still very dominant in every day life.

Next month, I will be writing about life as an operator in China, and will also point out the cost differences between Canadian and Chinese vending operations.  I found 16 million reasons to understand why we have so much to learn from each other.

Dave Murphy has been in the foodservice profession since 1967 with mobile, cafeteria, vending, and office coffee. He is now a consultant and broker to the industry. Visit his website at davidmurphyconsulting.com or call him toll free at 1-866-428-8428.