From the stadiums of star-studded virtual football games to the hoods
of simulated supercars, the billboards of visceral combat battlegrounds
to the backdrops of RPGs fantasy worlds, video games are becoming home
to a myriad of advertisers’ wares. 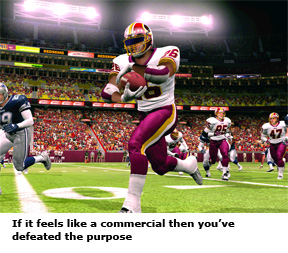 From the stadiums of star-studded virtual football games to the hoods of simulated supercars, the billboards of visceral combat battlegrounds to the backdrops of RPGs fantasy worlds, video games are becoming home to a myriad of advertisers’ wares.

For athletic brands, fizzy drinks and motor companies, video games have become a virtual playground. Brand-awareness, profile building and data capture are becoming as much a part of video games as graphics, gameplay and realism.

A recent report entitled “Marketers Look to Video Games to Drive Their Messages Home” shows how things have changed; it estimated that video game advertising will be worth $260 million by 2008, almost three times its 2003 value. It’s easy to see why brands would target gamers, they’re largely male, young, brand-savvy, and most importantly, have large amounts of disposable income.

The most common form of in-game advertising remains paid product placement forming part of the game’s backdrop, a car driving by a billboard or a city scene with a familiar fast-food restaurant on the corner.

However, there is unlimited scope for development; ads might be on buildings, vehicles or clothing worn by game characters. In ‘Nascar 2005: Chase for the Cup’, a game released by Electronic Arts last year, the game featured a pit crew made up of figures that look like Procter & Gamble’s (PG) Mr. Clean character while Jeans maker Levi has its product logo featured on one of the cars. 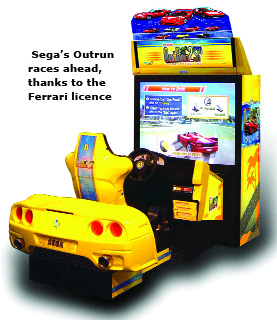 Strange Relations
So far, so good and so simple. However, scratch beneath the surface a little further and the video game-product placement relationship is not all it seems. Currently, the game industry pays licence fees to use products; the products get great exposure. It’s a relationship that stands at odds with television and film where soft drink, running shoe and car companies compete feverishly to have their products placed.

“Over the last year or so, TV advertising revenues have plummeted as companies look for new and innovative ways to convey their message. Video games pose an efficient and inventive opportunity to reach the notoriously inaccessible 18-34 year old male demographic. With that in mind, you’ve got to ask yourself whether the video game industry need to put a premium on product placement?

“In fact, it’s going to be interesting to see how the relationship develops, especially in terms of creative control. Running shoe companies won’t want their trainers soaked in Tekken blood for example while a boxing brand would accept it as part of the experience.

If paid-for product placement is going to play any part in arcade game development, companies investing are, understandably, going to want to have their say,” Brennan said.

“We’ve worked with Ferrari on Outrun, adidas on Virtua Striker 4 and even Boeing Jets on Afterburner Climax and on each project those big brands have had the final say with regards to the use of their intellectual property. If that relationship becomes based on financial investment instead of simply product placement, big brands are going to become even more controlling,” said Sega Europe’s Special Project Manager, Justin Burke.
“I think the way forward for advertising on video games is more about brand development than product placement. Too often, the lifespan of an arcade title surpasses that of a product. Take an iPod. If an iPod were included in a video game, the video game would need updating with the new versions with every new iPod release. The iPod will be out of date within a year or so whereas a game can remain viable for a lot, lot longer. If Apple is featured, the brand receives exposure for as long as the game is operational. I think that’s where there’s potential for new investment.”

Gextech’s Commercial Director Marc Campman understands the value advertisers could bring to their table.
“I think new gaming media platforms provide superb opportunities for advertisers. Our virtual football betting product, Fantastic League will be available across Interactive TV, Internet, mobile and terminal platforms, creating opportunities for advertisers to connect with a huge demographic who evidently have disposable income. As a sports-based title, Fantastic League has all the opportunities available to ‘real’ football teams – ground hoardings, players’ shirts, video screens, etc. I think the new gaming/gambling media provides advertisers with a world of opportunity.”

AMP It Up
While advertising techniques in video games continue to grow in exciting new ways, companies remain keen to make sure they are spending their AMP (advertising, marketing and promotion) budgets efficiently; they’ll be pleased to know, the numbers add up.

According to data released from a recent study carried out by video game publisher Activision and Nielsen Entertainment, 87 per cent of research participants had a high level of recall of a well-integrated brand inside a video game, 40 per cent of male gamers said in-game ads influenced purchasing decisions and in-game advertising was cited by 67 per cent as a factor that makes a game more realistic.

Get Real
That last statistic shows that advertising in video games continues to be, in many cases, a central part of the experience, as Erin Hunter vice-president at Internet analysts comScore, noted.

“The marketers and game companies are pretty smart about how they’re implementing these ads. They want to avoid interrupting games. As long as ads are part of the game experience, gamers are open to the concept.”
Well-known brands can make video games seem more like the real world. Yankee Group’s Media & Entertain-ment Analyst Michael Goodman said, “It would look strange if we were looking at a (virtual) baseball or football stadium and we didn’t see advertising on the stadium walls. However, the most important component of the advertising has to be that it’s unintrusive, if it feels like a commercial then you’ve defeated the purpose and all you’re going to do is create bad feeling. You always have to keep in mind that first it’s a game, and second it’s an advertisement. You have to entertain the gamer.”

Be it sports, racing or combat, the fictional landscapes of video games are increasingly populated with the products of real-life companies. Whatever the future holds, for now, advertisers use of video games, on the web, mobiles, consoles or arcades, grows apace in vibrant and unpredictable ways. What impact this could have for arcade titles is a point for debate. But as the mega brands look for new and innovative routes to market, the question is, can their commercial imperative do for the arcade sector what big business did for the soap opera?

Feature developed in partnership with ATEI, at the heart of the world industry. For more info and free entry badge registration: www.atei-exhibition.com o