The global video game industry, currently worth an estimated €45bn
(£30bn / $55.6bn), is set for the biggest growth spurt in its history.

The global video game industry, currently worth an estimated €45bn (£30bn / $55.6bn), is set for the biggest growth spurt in its history.

Who says? Women.
The sector, they say, is dominated by men designing for men who demand little more than varying forms of combat and sexualization of the few female characters who actually make it to the screen. ATEI feature looks at the band of sisters demanding that change and why, over the next decade, the video game industry could become a woman’s world.

More women are playing video games than ever before; in the United Kingdom, women make up just over a quarter of the total gamers, it’s a third in North America and a staggering three quarters in South Korea.

A study commissioned by ELSPA, the U.K.-based Entertainment and Leisure Software Publishers Association, says it’s time for the video game industry to wake up to the growth in women gamers. 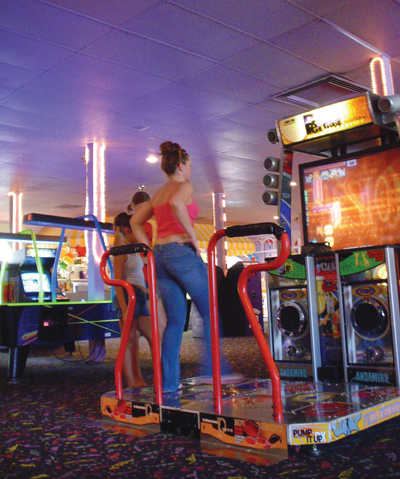 “The 15 to 24-year-old male market is saturated so the industry has to be interested in exploring different populations in order to expand. It’s a case of shifting the perspective of the games industry from one where you have to be a young, male, hardcore aficionado or you are nothing, to one where you are respectful and it is fun. While sports, racing and war titles remain dominant among men, women prefer role-playing games, narrative adventures, simple driving simulators, puzzlers and life simulators. Women like games that are easy to pick up, play, and master, rather than those with complicated controls that require a lot of time wasted on learning,” television presenter and study author Aleks Krotoski noted.

What the new women’s movement is learning is that together those demands can be heard. In August 2005, the second annual Women In Games Conference met to examine and campaign for the role of women in the industry while U.S.-based website www.womengamers.com is right at the forefront of the female video games revolution.

Members of their message boards complain that male video game characters embody the fantasy of what men want to be while female characters represent the fantasy women men want.

“Games that little boys are playing have unrealistic body types, 12-inch waists and C-cups, and it’s insane! So they’re coming to school and seeing women, and there are maybe five out of the 800 girls that go to my school that are even remotely related to this hourglass figure, and I feel pressure to acquiesce to their idea of perfection. It’s really unrealistic and upsetting. And that’s what video games are teaching us; this is what women are supposed to look like. Gender-neutral games are among industry classics. Titles such as Pong, Breakout, Pac-Man, Ms. Pac-Man, Centipede, Frogger and Tetris each had high female player ratios, so developers know it is possible. There’s still a place for gender neutral games, look at Dance Dance Revolution and the like,” one girl elaborated.

“Currently, most video game heroes, male or female, win their battles by fighting,” Ray said. “There are other ways. Innovative game design can use collaboration as well as competition as a theme, and focus equally on character and story. Women, and men for that matter, should demand and expect more girl heroes in video games, and characters that use intelligence, strength of character and compassion to meet the challenges set before them.”

Power to the people
Clarinda Merripen, of U.S. video game designers Cyberlore, spoke to a Boston audience in January of this year and told them that failure to respond to this malaise is commercial lunacy.

“Women are the new powerhouse,” she said, quoting the fact that they buy 66 per cent of all home computer and gaming equipment in the U.S.

She accused the game industry of alienating women by their marketing campaigns. As an example, she mentioned a Gameboy Advance SP advertisement where a guy and his girlfriend are in bed. She is sleeping, while he is playing his Gameboy in the dark.

“It practically spells out ‘women – this isn’t for you’ (and worse – guys would rather play with their Gameboy than with you).”

Merripen demanded that the industry re-invent their image. If Nike could get women to wear sports shoes, she asked, why can’t the game industry get women to play games?

And that’s where things stand right now – an increasingly forceful band of female video gamers demanding new products in an industry that demands new ideas just to survive. There should be perfect synergy.

The input of female game designers and developers is absolutely crucial, as is the new attitude, perspective, experience and balance they bring. The untapped, fertile women’s video game playing market could prove a promised land for an industry yet to fulfill its potential amongst 50 per cent of the population. Surely it’s game over for the days of the men making games exclusively for men.

Feature developed in partnership with ATEI, at the heart of the world industry. ATEI 2006 – Earls Court in London, England, January 24-26, 2006