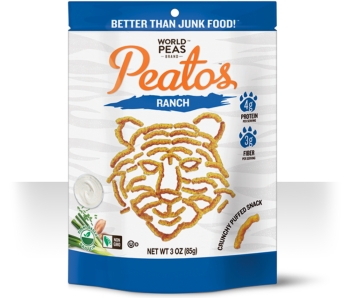 Adding to its line of better-for-you snacks, Peatos invited attendees to sample its new Ranch flavour as well as fan favourites including Classic Cheese, Fiery Hot, Chili Cheese and Masala.

“We’re thrilled to be back at Expo West as Platinum Sponsors, and we’re going big with our new flavour release. Ranch makes everything better and we added it to a snack that’s already ‘Better Than Junk Food’. It’s a powerful combination,” said World Peas Brand CEO Nick Desai in a press release. “We set out to make a better ranch flavoured snack than currently exists on the market, and we believe that we have done it.”

Peatos, a  crunchy puffed snack made from pulses (peas and lentils), tastes and crunches like “junk food,” and the company states it features more nutrients than junk food, with twice the protein (4 grams) and three times the fibre (3 grams) of Cheetos. Peatos are made with non-GMO ingredients, contain no artificial flavours or synthetic colours and have no added MSG.

“Due to its high plant-based protein content and cleaner ingredients, Peatos bridges the gap between the usual empty-calorie junk-style snacks and better-for-you snacks that lack flavour,” added Desai.

Peatos is often merchandised in the produce department and is available in banner stores and online on Amazon.